Early this evening Lenore asked me to come and look at a Rough Skinned Newt in our backyard pond. So I walked back with her to see if I could spot it.  I looked and looked and couldn't find it. As I turned to walk away I spied a tree frog AKA Pacific Chorus Frog on the very edge of the pond. I made a Criiich noise and low and behold the frog started croaking back at me! Lenore stayed with the frog and I ran and grabbed my camera. In all the years we have had the pond I've never been able to see one calling. Here was one less than three feet away from me calling loudly as bold as brass. After a whole bunch of unsuccessful attempts I finally was able to get one image in focus. Turns out my f stop control button is broken on my camera and it needs to go in for repairs. This was my first attempt at photographing a calling frog so hopefully next time I will do better.  God's love and blessings to all, chris 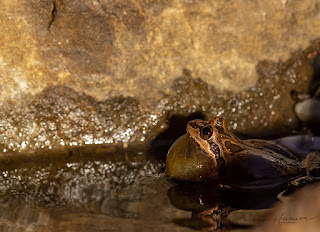 Posted by Christhephotog at 9:10 PM 2 comments:

With spring clouds on the move it's a perfect time to put my infrared camera to use and play with a different kind of light. A couple of days ago there were some really nice clouds backing up against the Mendocino Range over the Little Lake Valley here in Northern California. I framed them through the trees with a wide angle lens. I really liked how the images came out. Both images were created with a Canon EOS 7D  camera converted to Infrared Hypercolor with a Canon 10-22mm lens. the camera settings used were AV mode, ISO 400, F 9.0 at 1/400th of a sec. God's love and blessings to all, chris 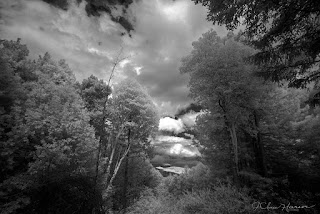 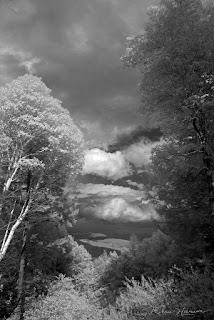 Yesterday I was cleaning up my my computer when I ran across some Steller's Jay images that hadn't been processed from July of last year. It's amazing at what you can find when looking back through your old work. Oh no! More Steller's Jays. Have you seen enough? As you can see they were created at the same set up in my backyard. Their blue plumage is just stunning especially against a green background. God's blessings upon the rest of your week, chris 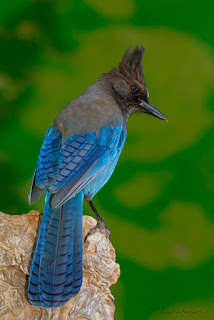 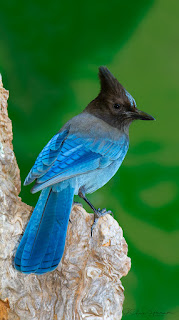 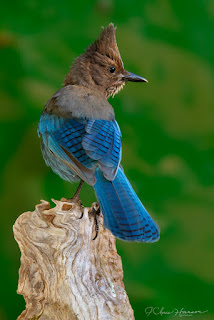 Posted by Christhephotog at 7:48 AM No comments:

I have an aluminum sheet of diamond plate that I just purchased for a project I'm working on.  This morning I grabbed it for use as a backdrop of photographing Badger the Wonder Dog. I leaned the metal plate up against a desk in our living room by an open window. The goal was to have him with his dog biscuit hanging out of his mouth. But he was hungry and was having none of that. He just wanted to eat it. So I settled for that. God's blessings upon your day, chris 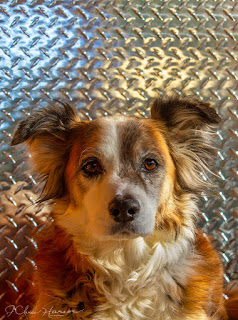 Just Me and the Steller's Jays

I created a new set up in the backyard. The big snowstorm we had last month knocked down a lot of great branches to be used for perches in my bird photography. This lichen covered oak brach is just perfect. I 've been using for over a week and it's about time to retire it. You can only photograph so many squirrels and Steller's Jays on it before it gets a little old. All of these images were created with my Canon EOS 7D MKII camera using a Canon 100-400 mm v.1 lens. For fill flash I was using a Canon 550 EX Speedlight. typically set to a minus 1 2/3rds stops below ambient light. God's light and love to all, chris     #teamcanonusa 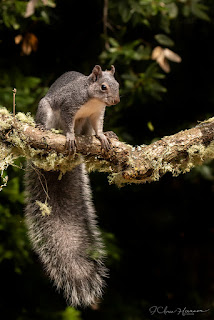 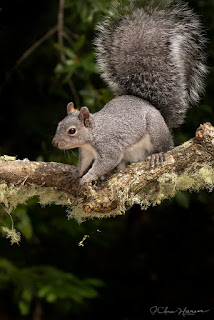 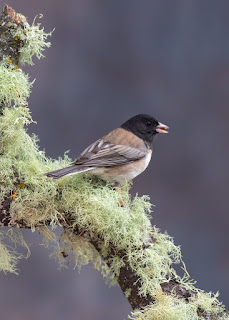 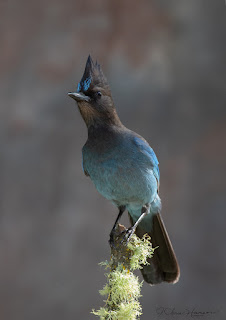 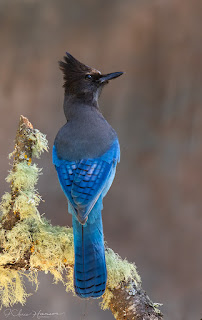 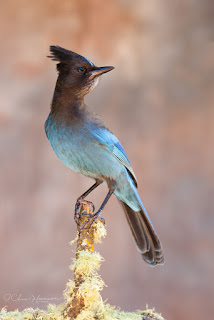 Posted by Christhephotog at 7:44 PM No comments:

One of the most common questions I get asked about  my photography is, "What camera do you use?" Over the years that has changed depending upon what camera I was using at the time. It has been from a Polaroid SX-70 to a a 4x5 field camera and a lot of other cameras in between. Especially as technology has changed. I went from film cameras to digital cameras. My current work horse is a beat up Canon EOS 7D MKII camera and a Canon EF 100-400mm v.1 lens. I would guess that about eighty percent of my work is created with that. The key word in that sentence is create. Cameras and lenses are my tools to create. Just as brushes and paints are to an artist. Though in comparison I do believe it is much more difficult to be creative with brushes and paint. I've dabbled in watercolor over the years and I must say I'm much more successful as a photographer.  Here is the tool that I'm primarily using right now for most of my work.  What tools do you use for your creative outlet?

God's love and blessings to all, chris 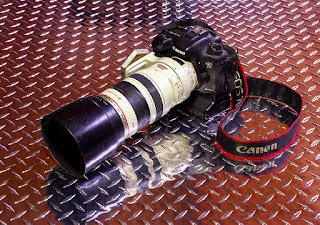 My intention was to drive out to the  Sherwood Valley and photograph this large rock with clouds behind it. Before I left I thought I had better grab my other camera with a telephoto lens on it just in case I spotted some wildlife along the way. As it turned out this ended up being a wise decision. The first thing I spotted was a Turkey Vulture sitting on a lichen covered post right next to the road. I pulled up into a wide spot in the road just past it, I got out of the car and slowly walked towards it. I was able to take almost fifteen images of it before it flew off. 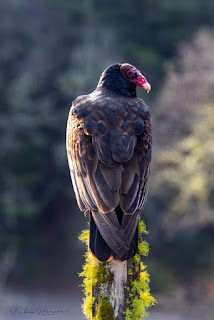 From there I drove out into the Sherwood Valley. Sadly the clouds were not as dramatic as I expected. Though i still took some time and created an infrared image of the rock with some so so clouds behind it.  It's hard to believe that at one time there used to be a town here. 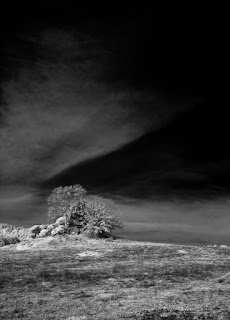 On the return trip just after leaving the entrance to the valley I spotted a large group of Wild Turkeys  in an open area just off the road. I  photographed first from the open window of the car and then stepped out of the car when they moved further down the meadow. The hardest thing to do was to get turkeys isolated by themselves as the flock was so big. There were about forty turkeys in all. 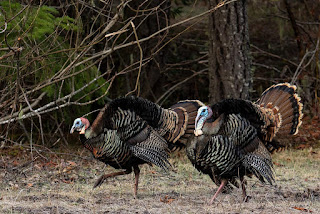 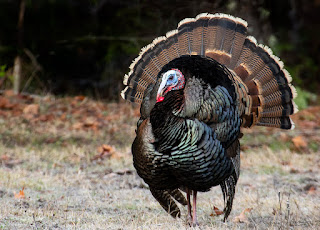 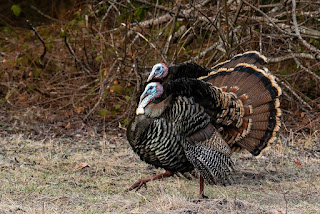 Winding my way down Sherwood Road I spotted a lone Blacktail Deer close to an area called Swampy Gulch.  Local rumor has it that Swampy Gulch was created by the Great Earthquake of 1906. The whole area dropped six feet during the earthquake and then was flooded by the creek. 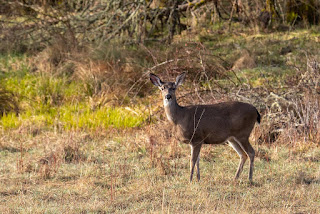 Passing Swampy Gulch there was a small herd of Tule Elk feeding on the shoulder of the road. I photographed a spike bull and a young cow. 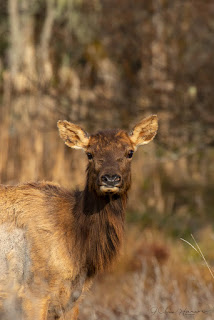 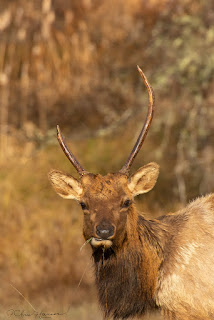 I had a great drive with some beautiful sights to see along the way. God's light and love to all, chris
Posted by Christhephotog at 3:26 PM 1 comment: