I have been away from my photoblog for quite some time galavanting around on a three city tour of Scandinavia. We visited Copenhagen, Denmark, Vaxjo and Stocholm, Sweden. It was Christmas time so there was an incredible amount of decorations up to light our way. I did a lot of night and long term exposure photography. At that latitude in December the sun rises at about ten a.m. and goes down around four p.m. and it doesn't rise very high in the sky. This will be my last posting of 2016. Here isn image of Nyhavn, Copenhagen. There will be many more images and details to follow over the next month as I slowly get around to processing all of our images from the trip. God's love and blessings upon a New Year, chris 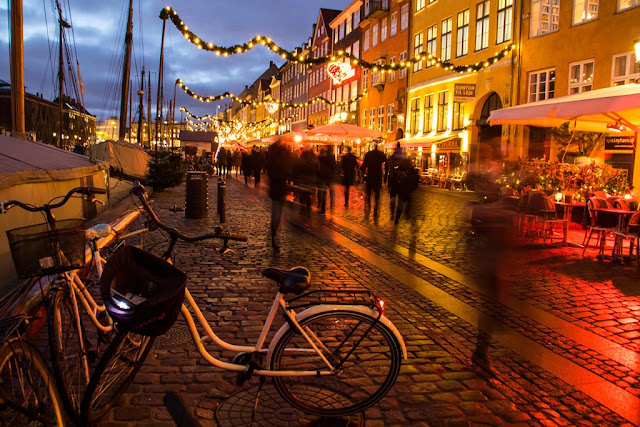 Many thanks to Jenny Senter of Celtic Heritage Destinations for organizing such a fantastic trip.
Posted by Christhephotog at 11:45 PM 1 comment:

Looking Back in Time

Once again while looking for a piece of camera equipment I ran across another old camera. This time it was Lenore's brother Rich's Kodak pocket 20 camera in the original packaging. It is in fantastic shape and looks like it was only used a few times due to the fact that only two of the flash cubes are missing from the box. These cameras were made in the 1970s and used 110 cartridge film. We sure come a long way since then! 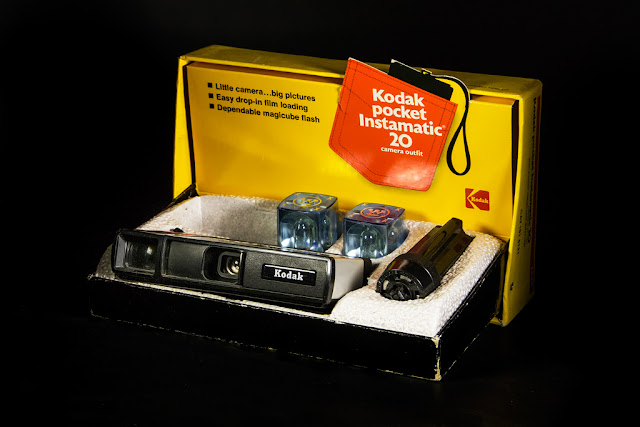 As a photographer I am always on the lookout for images that catch my attention. Which can keep my mind pretty busy because there is always something interesting passing me by. Yesterday when I dropped off Lenore at work there was this bright orange little car next to where I parked in the rain. It wasn't the car that caught my attention so much as the repeating pattern of the water droplets beaded up onto the nicely waxed finish of the vehicle. I grabbed my camera and made a variety of images of the droplets but this one is the one that worked best. God's light and love to everyone, chris 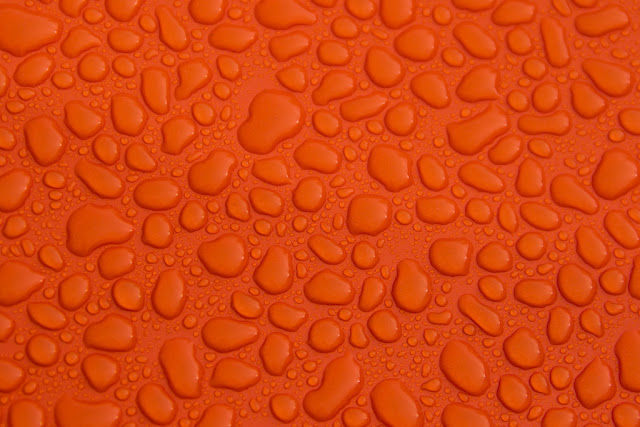 Photographed with a Canon 7D mkII and a Tamron 18-200mm lens handheld.
Posted by Christhephotog at 8:42 PM No comments:

A Few More from the Knothole Feeder

I set up the knothole feeder with fall colors in the background. Then I loaded up the feeder with black sunflower seeds and went inside and waited. While I was waiting I worked on editing some images. I was very surprised to see that my first visitors were the Yellow Cheeked Chipmunks soon to be followed by some Chestnut Backed Chickadees and Dark Eyed Juncos. Then everyone scattered when the Western Gray Squirrels showed up. They are the backyard bosses and when they show up everyone else moves out of the way. All except the hawks of course and I didn't see any today. God's light and love to all, chris 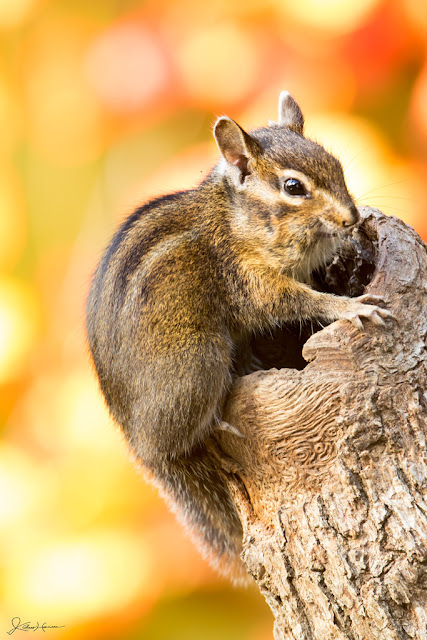 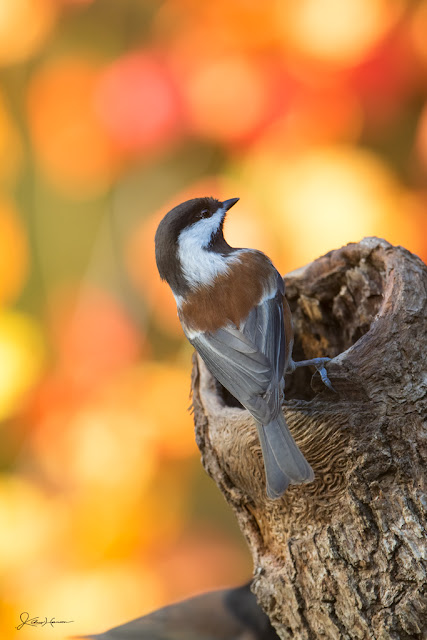 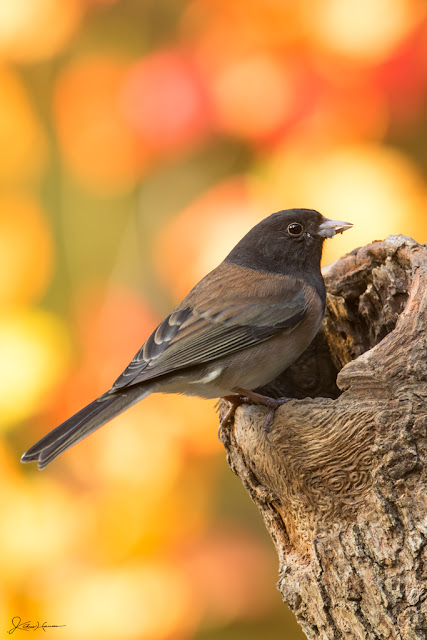 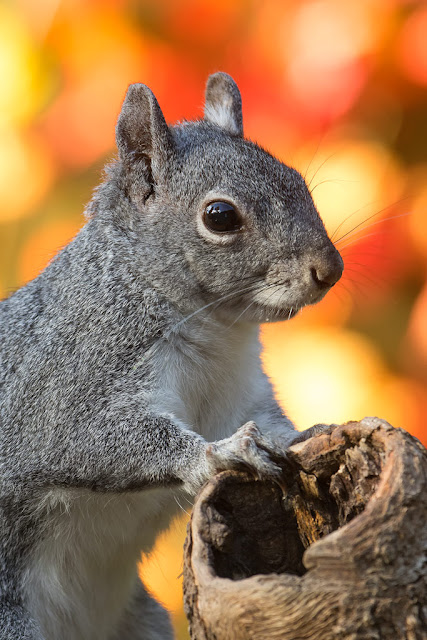 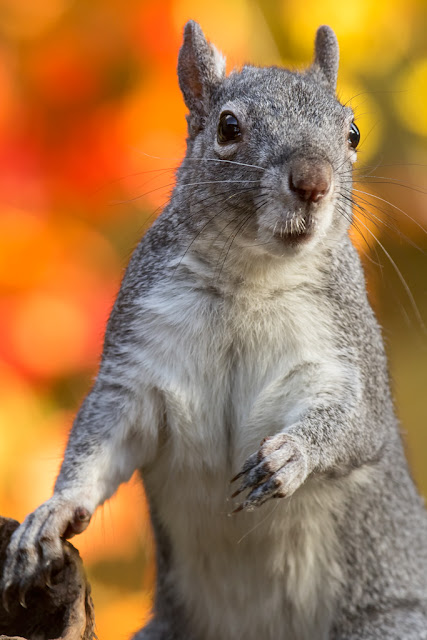 Over the years the trees on the neighboring property have grown significantly blocking my view of the sunset over the Pacific Ocean. Now all I'm left with is a little slot between the trees if I walk down our road a little bit. Earlier this week Lenore told me to come out that the sunset was pretty nice. I'm glad I did because it was beautiful. I created two views one horizontal and one vertical. which is always a good idea because magazine and web articles tend to use vertical images. Both images were created with a handheld Canon 7D mkII camera with a Tamron 18-200mm lens.Have a blessed day, chris 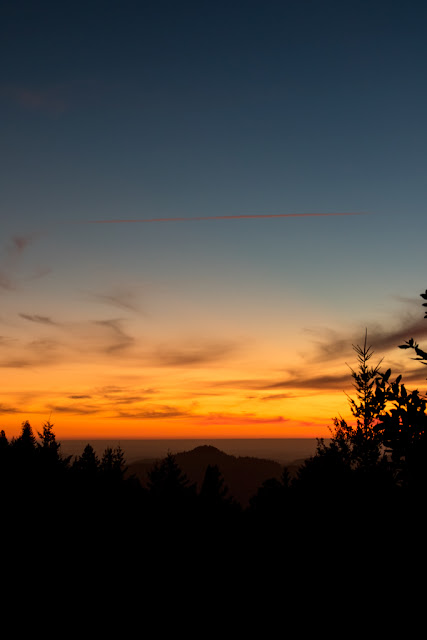 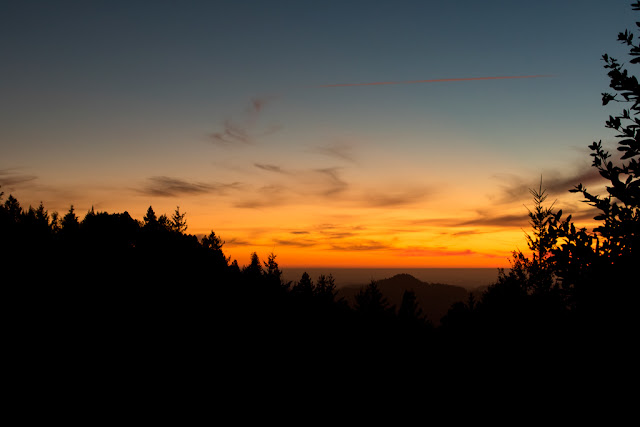 Posted by Christhephotog at 12:30 AM 2 comments:

First off thanks to John Hamil for the inspiration to do a few more on the fence images of birds and squirrels. He recently posted an image of a spotted Towhee on a fence that I really liked.Check out his bird photography when you get a chance he is very good. Also thanks to Nick Luo and Scott Ackerman for the fence tops that I used as a prop for these images. To create these images I took the fence tops and nailed the together onto a longer board to resemble a fence top. The fence top wood was brand new redwood so I painted it with a mixture of steel wool soaked in vinegar to age it and make it look more gray. The first images I created with the brand new wood just didn't look right. After painting I mounted it next to the bird feeder for the birds to land on. I ended up really liking the final results. God light and love to all, chris 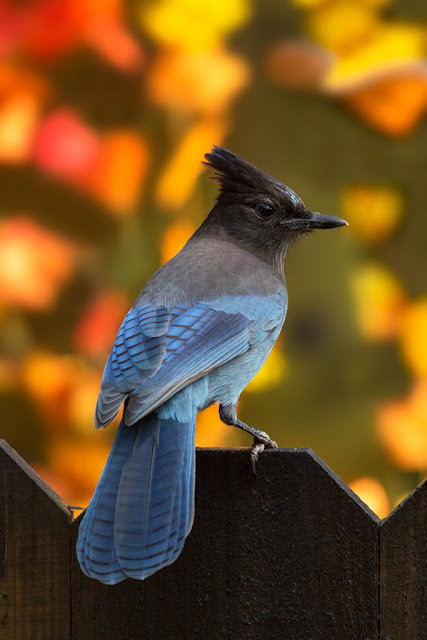 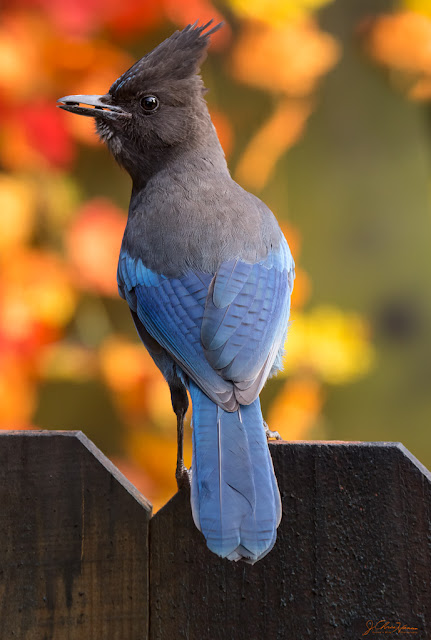 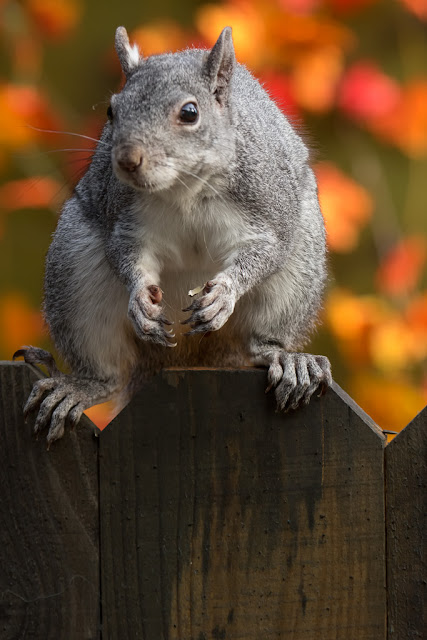 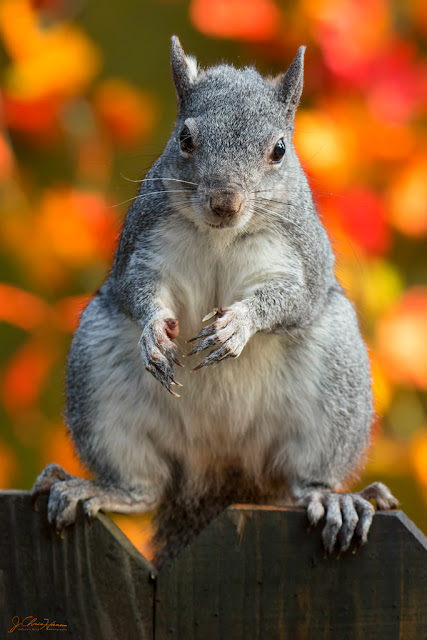 Fall is beginning to head out and winter is just around the corner. It has been cold in the morning lately. All of the Montanans, Siberians, Alaskans and North Dakotans etc. will be laughing at this but here in Northern California on the coast it has been in the high twenties the past few mornings. Frozen puddles and frost. Time to get that wood stove stoked up and going. Below are some frosty Oak leaves that I photographed before going to work out at the gym this morning. I hope you are having a great week. God bless, Chris 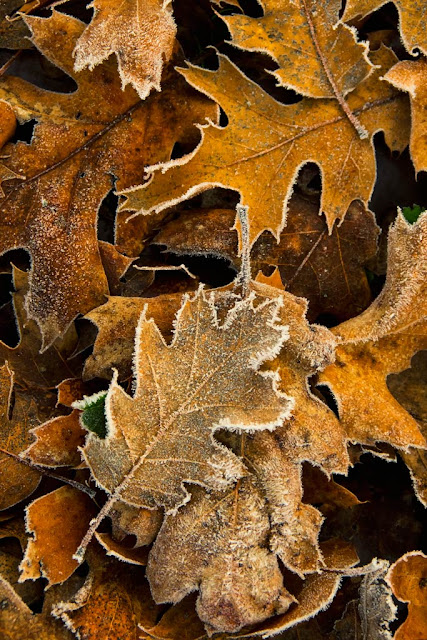 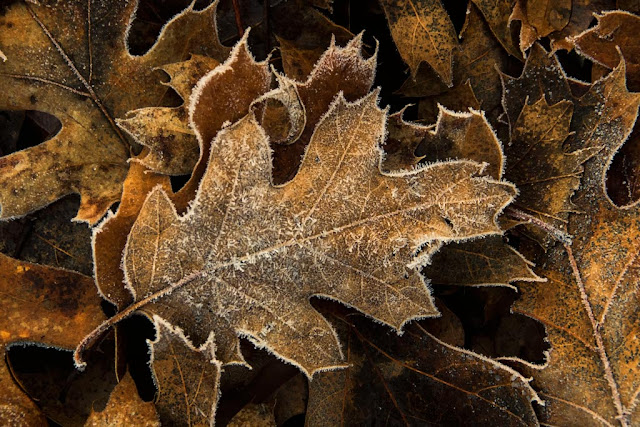 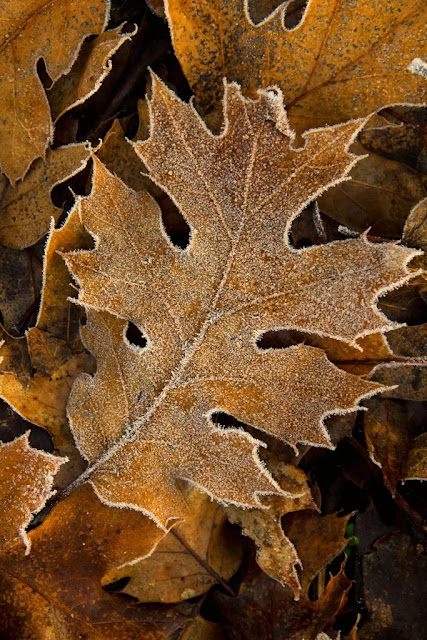 All images were created with a handheld Canon 7D mkII and a Tamron 18-200mm lens. Exposures varied.
Posted by Christhephotog at 12:30 AM 3 comments:

Last week when I was photographing squirrels I heard a Robin up in the trees to my right. I ignored it. Then I caught some movement down in front of me. It was creeping around on the ground on the far side of our little garden pond. It was watching and waiting to see if it was safe to come down for a drink and a bath. Birds are extremely vulnerable to attack when they are drinking or bathing because their head is down. A sparrow jumped in ahead of it got a drink. Feeling it was safe the Robin warily came down the slope to the pond. Very carefully I moved my lens down to focus on the pond. I spooked it. Oh rats! The Robin ran up the slope away from the pond. I froze not daring to move an inch. The Robin turned and warily made its way back down to the pond. It would get a drink and then back off away from the edge. This went on for a couple of minutes before it tentatively got into the water. Very slowly it lowered itself down into the water to bath. It splashed around just a little bit and then it would stop and look around. Eventually it decided it was safe and it went at it full bore in a blur of water and feathers. I was clicking away when suddenly it launched it self up out of the water and was gone in a blur. May you have a blessed week, chris 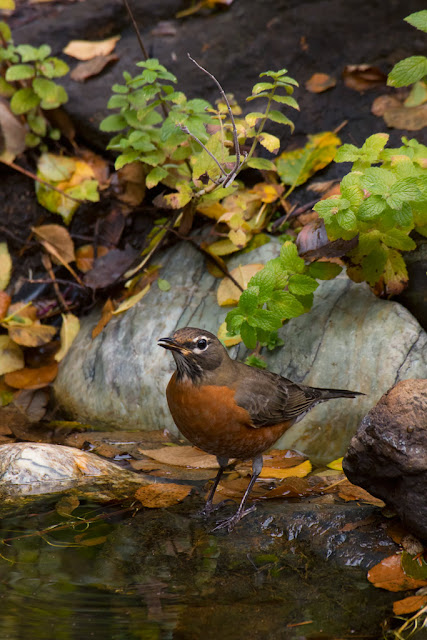 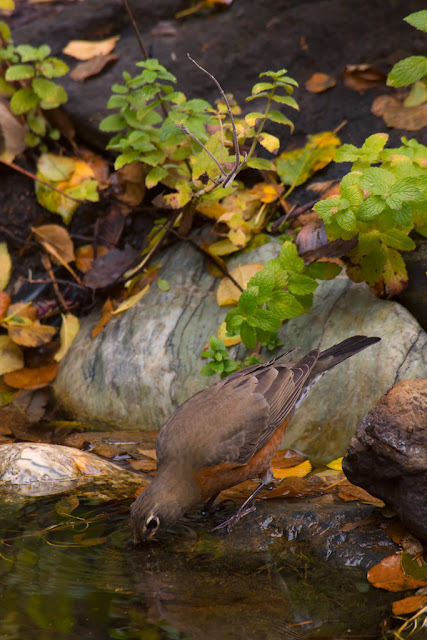 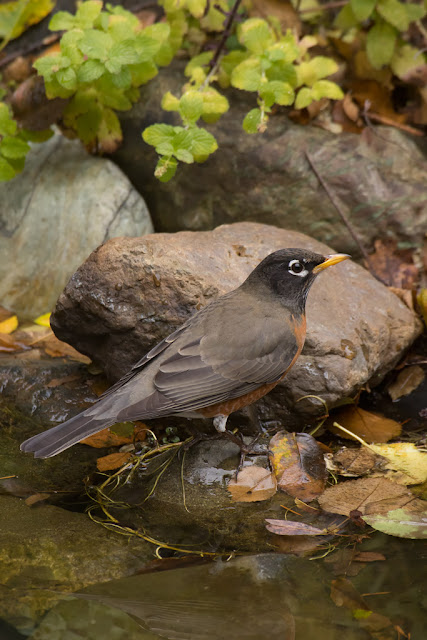 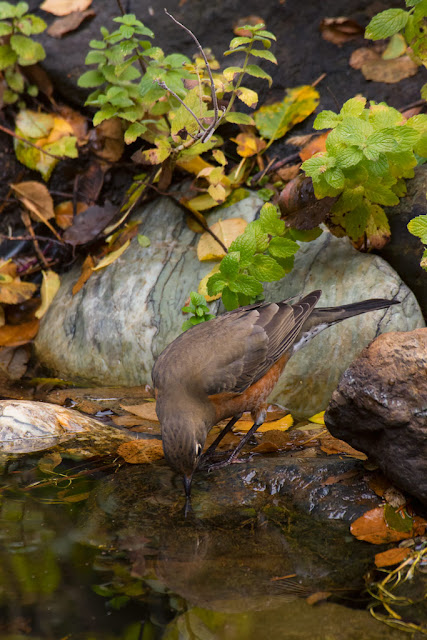 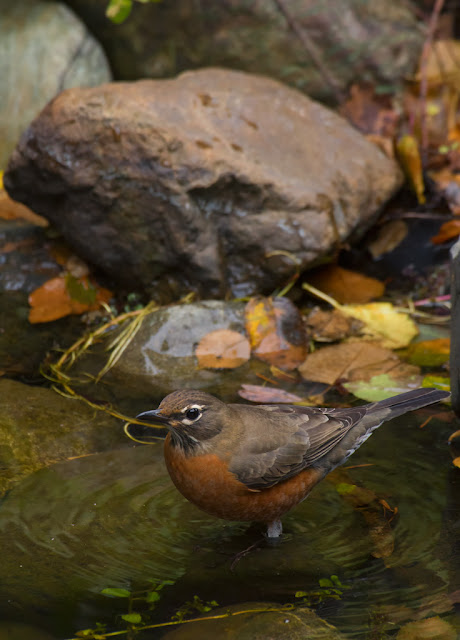 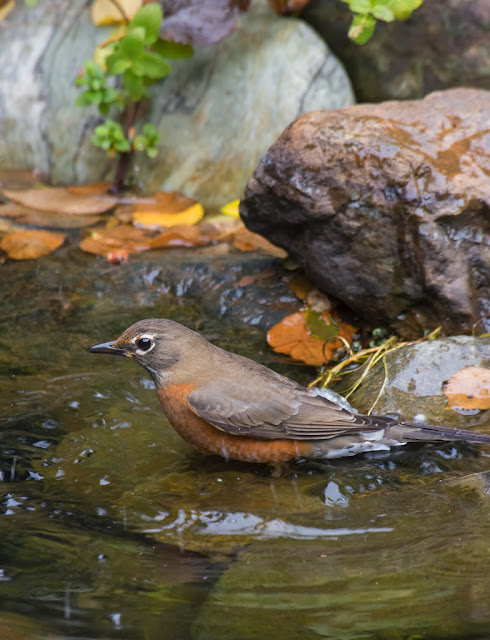 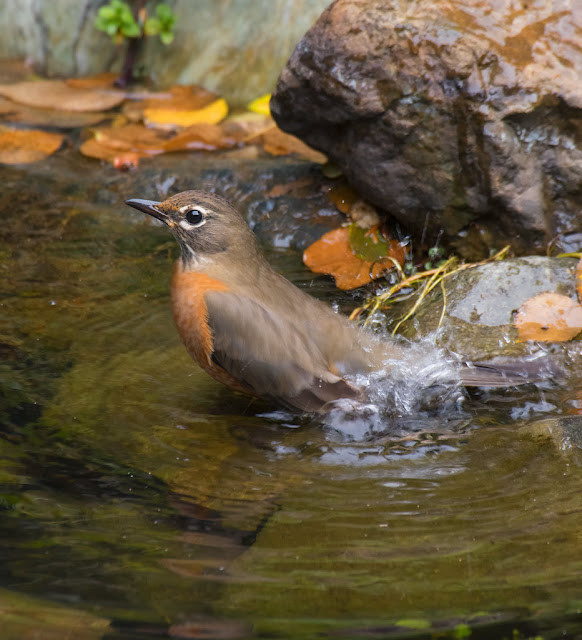 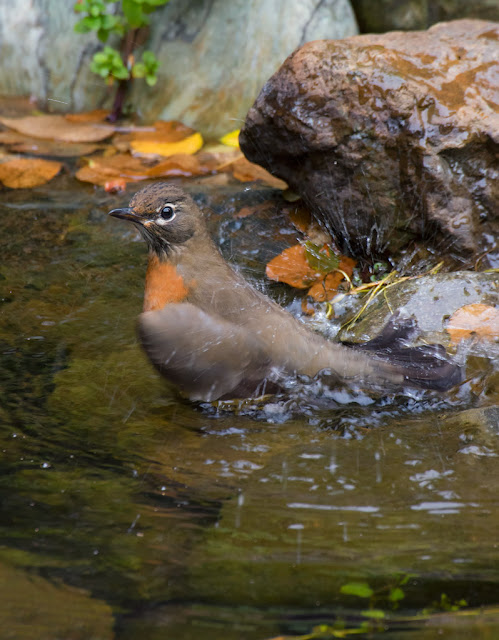 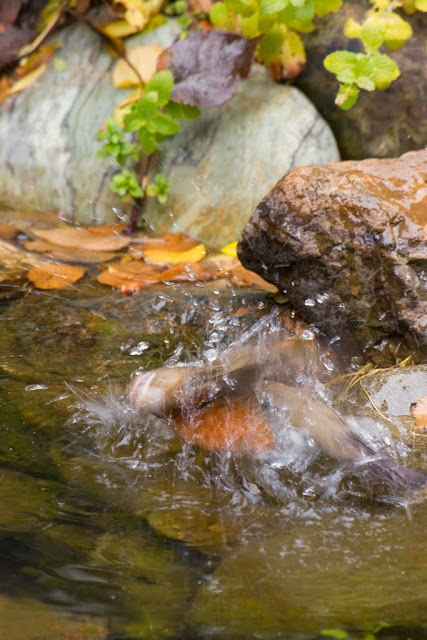 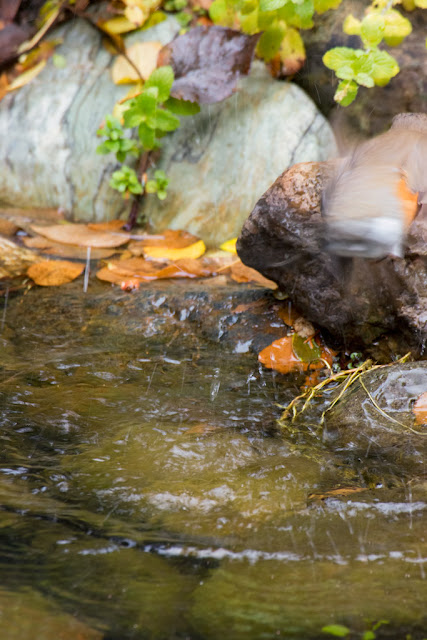 All images were created with a Canon 7D MkII and a Canon 100-400IS v.1 lens. #TeamCanon
Posted by Christhephotog at 12:30 AM No comments:

From Out of Chaos

Straightening up the living room earlier this week I ran across Lenore's yarn box. While moving it the lid slipped off and I was gifted with seeing a riot of colors and textures hidden within. Hmmnn... I thought to myself that might make an interesting image. I grabbed my camera and a sturdy tripod and set to work. It took a few images to get what I wanted but I was happy with the result. It always amazes me that Lenore can create beautiful things from such a chaotic mess of yarn. Just the other night she crocheted a really cool hat. She told me that a woman complimented her on it when she was walking across the grocery store parking lot. It really makes me wonder how did human beings figure out to get wool from a sheep make it into yarn and then use funny looking stick like things to fashion clothing? From out of chaos to a thing of beauty. I think the Lord's hand is at work here. Have a great day and God bless, chris 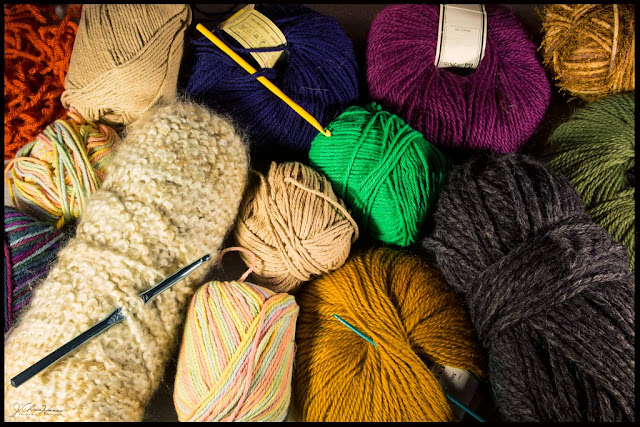 This image was created with a Canon 7D mkII and a Tamron 18-200mm lens.
Posted by Christhephotog at 12:30 AM No comments:

My favorite squirrel hands down has to be the Douglas Tree Squirrel also sometimes called Chickarees. They are very similar in appearance to the Red Squirrels found in other parts of North America. They are quite gregarious and are pretty feisty when it comes to claiming the feeder for themselves. I have watched them fend off the much, much bigger western Gray Squirrels many, many times. In my backyard they are the only squirrels that have sort of adapted to having humans around. Which makes them a little easier to photograph because they don't always take off when I look out the window like the other squirrels and chipmunks do. Here is one that was giving me the stare down earlier this week from the top of the knot hole feeder. 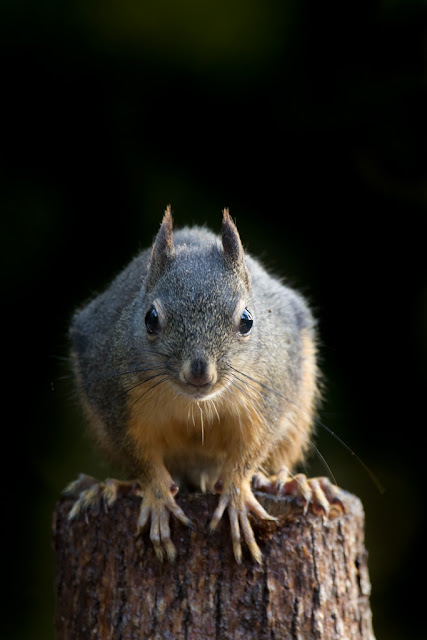 Another Image of the Brick

About a year and a half ago I had a blog entry about my first serious camera an Argus C3 which had the nickname of the "Brick". The moniker suites it really well due to its shape and weight. Yesterday morning I was looking for some steel wool and I was sure I had some in one of my photo cabinets. I didn't but I ran across my old friend the Argus and I decided to rephotograph it with some new LED lighting I purchased awhile back. I photographed it on a black sweep using three lights. Two on the sides and one slightly off center in the front. I must say that I was very pleased with the result. This Argus has a lot of sentimental value as it was given to me by my Dad and it's the camera that I learned the basics of photography on. Surprisingly the camera is still in working condition. The Argus C3 was mass-produced from 1939 to 1966 by Argus in Ann Arbor, Michigan. There were over 2 million of them made making it one of the most popular cameras in history. God's precious love to all, chris 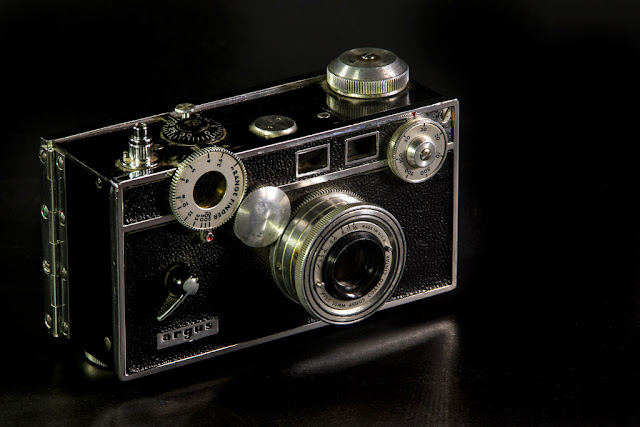