Wednesday morning I added another image to my "Blues Collection" of Steller's Jay images.  Late Tuesday afternoon I went out into the backyard and set up a lichen covered brach about twelve feet out from our back bedroom window. I clanped it at an angle between to up right perch supports at a nice angle for the birds to land on. Just above it and out of camera view I hung a single port bird feeder filled with black sunflower seed. Then I went back inside the bedroom and pulled the window screen out and put the window hide/ blind in it's place. On Wednesday morning I was up bright and early waiting for the birds to come. I waited and waited and nothing came. What's a fella to do but go make some breakfast. While I was preparing breakfast I heard the distinctive call of the Jays. I grabbed my breakfast bowl and hurried down the hall into the bedroom. Looking out from the blind i watched the Jays feed looking to see where they were landing. Once I figured that out I prefocused my Tamron 150-600 mm lens on the spot. I was alarmed to see my shutter speed on my Canon E|OS 7D was quite low! I took about thirty exposures and all but four had some kind of motion blur in them. One however looked pretty nice. Late after uploading the images to the computer I was very happy to see it was pretty sharp. I had the image i was looking for. Great over the shoulder pose on a beautiful perch. Later on I set up my camera again and Got a really nice Western Gray Squirrel in the same spot. They have the most awesome tails. God's love and blessings to all, chris 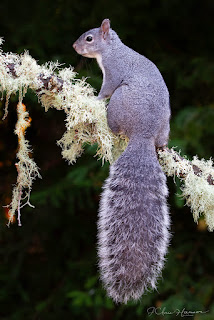 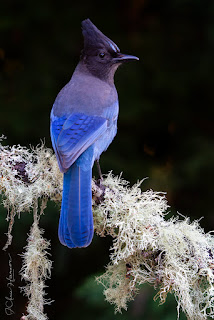 Posted by Christhephotog at 1:20 AM